Another chapter (and verse) in our journey for real community music today at The Lord Palmerston to which we played a few songs to a few after work patrons who were mostly appreciative.

Of course, we chose the most effective form of transport for our flash mob/ minstrel show, a car! as many of you will know, Camden is virtually impossible to park in, so we literally had to pay to play.

We were really exited that we were last on the bill, and the venue was full of record company execs. Unfortunately, they had all come to see the band before us and by the time we came on, the place was empty.

Today has restored my faith slightly, and of course I realise that not everyone will have the same attitude. In fact in Camden, all three venues we found (although not pubs) with pianos kindly let us play them. Here’s a video of Dorian and myself performing ‘The Foggy Foggy dew’ at a lovely tea shop inside the market. We weren’t offered any tea or cake, but you can’t have your cake and….

We moved on to this recently opened drum shop called Tower 47 and were greeted by a warm and engaging couple called Sydney and Matt, who were more than willing to let us play a couple of songs. Didn’t get a coffee either but I hear it’s pretty good. May be next time.

I can’t believe how hard it is to get a gig, even if you’re offering your services for nothing.

As we found out recently thanks to the londonist, there a lot of pubs that have playable pianos, with nobody playing them.

We (Burton Bradstock) thought that we’d pop into some and ask if we could play a couple songs. No catch, we don’t want a gig (not necessarily, all freelance musos are programmed to sniff out potential gigs), just to play a few songs…..

This is not as easy as you might think. Firstly, you’re given the ‘Spanish’ and secondly you’re bombarded with “weekends are too busy, ‘Karaoke’ on Wed, and an open mic night on Thu” etc. Nothing wrong with the latter, well actually…. No, we just want to come in occasionally and play a few songs, perhaps in the day time?. “Well we have business people who come in to read the paper, not to listen to music!”.

I imagine that you’re thinking NO is NO, and you’d be correct, I shouldn’t push the subject, but it still astonishes me that two professional, reasonably successful musicians who are offering their services for free are greeted with disdain.

To be devils advocate, I can see from his point of view it’s probably like someone coming in and asking him if they can dance freestyle at the back of the pub for no reason at all.

I suppose my point is that the music culture in this country dictates that we should fit in to a prescribed system and that status is measured on youtube hits or singing an insipid cover of the Power of love.

Recently added, is this heart felt description of the workings and inspiration behind the painting of the album cover by Ed Gray. (click on picture)

Available to buy through the links on the right……

On the gig were: 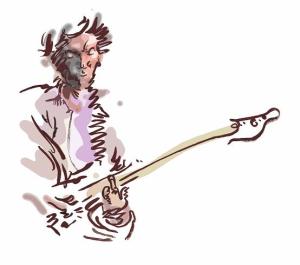 Ladies and Gentleman, the debut album ‘All Upon a Lovely Summer’s Day’ by Burton Bradstock, is now officially released through F-IRE…

still a few tables left for the album launch at pizza express dean st on the 30th. Don’t leave it to the last minute! http://ow.ly/el4k5

So, I’ve finally finished my press kit https://presskit.to/burtonbradstock which is simply a way of combining all your relevant media into an app, which for instance you can insert as a signature on the bottom of an email or as a page on your website. (see press)

To be fair, there were a few teething problems with presskit.to; Content not uploading, images not being displayed on Mozilla, account frozen etc. which was a bit of a pain, but I must say that although this was a slight inconvenience, the ‘Community team’ dealt with it extremely well and bent over backwards to accommodate me.

Have a look, and tell me what you think of the content etc. particularly whether you think it’s worth paying a $1.99 a month for? One good thing is that you can add multiple press kits, so I’ve added https://presskit.to/jimmycannon which just includes information about me as a session Singer and Saxophonist.

This is obviously designed at journalists etc. who haven’t the time to wade through reams of biography’s and audio tracks. They just want the short bites of information.

I’ve been instructed to add more content, and one of my issues with this, is the lack of followers on my blog. It seems like a ‘catch 22’; Without fellow bloggers it’s hard to justify adding any content and without any content, you get my drift. Also, what about the pressure to include something more interesting and perhaps more visually stimulating than your last blog, my album artwork, which is testament to the art itself.

Actually, I thought it would be interesting to share my experience so far with you. I’ve recently signed up for http://presskit.to/ which is offering an 80% discount on their Pro version. I’m not sure what they can offer me yet, and will keep you ‘posted’. I already have: an EPK, a blog (although no one knows who I am) which doubles up as my website (I had an ‘arty one with flying birds designed using Flash), a sound cloud link to my album, a Facebook page, so we’ll see….

Another website I heard about recently is http://hypem.com/ which I’m yet to wade through the mass of bloggers and feeds to discover it’s riches, and likewise I shall let you know what I find.